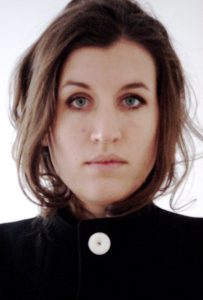 Sofia Simitzis is a director in the field of contemporary musical theater with a great interest in the development and the realization of new musical theater performances. From 1998 to 2004, she studied Drama, Literature and Musicology at the Ludwig-Maximilians University in Munich, at Sorbonne Nouvelle in Paris and at Freie Universität in Berlin, from where she graduated with a thesis on Christoph Marthaler.

Along with the art group Gob Squad, she has toured in Europe, USA, Canada, Asia and Australia. She directed, among other works, the opening of Graz Festival, „Specter of the Gardenia“ with Ensemble Modern, “Flux: nm” for the Berlin State Orchestra within the context of Infektion Festival, “Europera 3” by John Cage and “El Cimarron” by Hans Werner Henze. With the support of the German Cultural Fund Hauptstadtkulturfonds, she developed and directed the play “Bye Bye Blondie”, while earlier she had created the play “Interview“ based on a composition by Eunsun Lee and on the initial protocols of consultation with the Federal Office for Migration and Refugees within the context of the music-theater exhibition “Interiors” in Frankfurt Opera.

She has been a lecturer in the Foundation for the Study of the German People (Summer School of Görlitz). From 2004 to 2007, she worked as assistant director in Christoph Schlingensief’ s productions, including “Parcifal” (Beyreuth Festival), “Fluxus-Oratorium”, “Church of Fear” for Ruhr Triennale / Theatertreffen 2009, as well as in Volksbühne in Berlin.