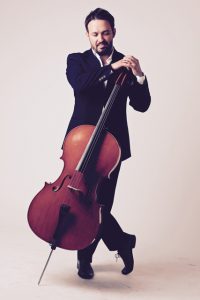 Australian cellist, Martin Smith, studied in Florence with Natalia Gutman, and in Berlin with Prof. Eberhard Feltz. Martin has appeared as soloist throughout Europe with recent performances including concertos with the Plymouth Symphony, Leipzig Philharmonic, Orchestre de Chambre de Lyon, and has appeared as recitalist in venues including Concertgebouw, Wigmore, Konzerthaus, Philharmonie and Suntory Hall.

Martin has collaborated with musicians including Midori Goto and Leon Fleisher and has recorded for NAXOS, ABC Classics and MDG labels. Martin has been generously supported by numerous foundations including the Australia Council and the Brian Boak foundation, and was recently announced KPO Young Perfomer of the Year.

Martin most recently was awarded the ECHO-Klassik prize for Ensemble of the Year, as member of the Berolina Ensemble. Since 2009, Martin has been a member of the Zafraan Ensemble in Berlin.