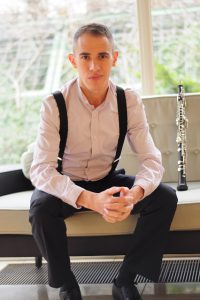 As an oboist and teaching artist, New Yorker Demetrios Karamintzas enjoys a career that has brought him all around the world.

In addition to playing concerts and teaching, Karamintzas also founded the concert series in Berlin, Klassik in Moabit, where he also serves as artistic director. Following the current refugee crisis in Europe, Karamintzas co-founded MitMachΜusik, a non-profit organization providing music education to over 200 refugee children in Berlin.