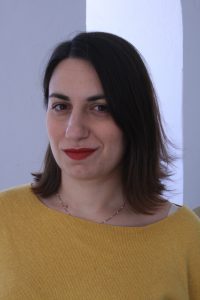 Eleni Efthymiou was born in Exeter, England in 1986. She works as a director, actor and singer. As a director she has worked with organisations such as the National Theatre, the Onassis Cultural Centre, the Athens and Epidaurus Festival, the Alternative Stage of the National Opera, the National Theatre of Northern Greece, the Municipal and Regional Theatre of Ioannina, the Thessalian Theatre, the Municipal and Regional Theatre of Kozani, Dimitria Festival, and others, as well as with institutions and festivals abroad such as the Biennale for New Music Theatre (Munich), the Ingmar Bergman Festival (Stockholm), the Festival MFST ITSelF (Warsaw), the 30th European Young Theatre Rencontres (Grenoble) and others.

In the last five years she has worked with the En Dynamei ensemble, with which she completed in May 2018 the theatrical trilogy “The Normal Other”, the last part of which (“Horse in Love”) was presented recently at the Athens Festival, while last May she presented the first part of their Trilogy “The Fan Man or How to Dress an Elephant” at Our Stage – 4. Europäisches Bürgerbühnenfestival (Dresden).

Also, she recently participated with the production of “Die Jagd” at the music theatre festival “Die sieben Leben des Maximilian” (Innsbruck), while this time she is working on the play “The Big Square” by Nikos Bakolas, which will premiere in October 2019 in National Theatre of Northern Greece.