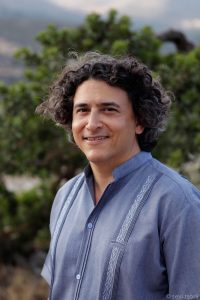 Eleftherios Veniadis, son of painter Kyrillos Veniadis and musician Niki Veniadi, grew up in Chios. He studied acting at Veaki Drama School and piano, violin and music theory in Athens.

He was awarded the 1st prize in the “BERLINEROPERNPREIS 12” International Opera Competition, along with the music and dance group “Kompanie Zwischen” and the NaföG research fellowship of the city of Berlin.

His works are presented in festivals and concert halls in Greece and abroad, including: the Festival of contemporary music theatre of the Austrian Tirol, the new talents Biennale of Cologne, the Athens Concert Hall, the Athens Festival, the Onassis Cultural Centre, the Deutsche Oper Berlin, the Biennale for New Music Theatre of Munich, the Ruhrtriennale etc. He lives and works between Chios, Athens and Berlin, seeking new forms of expression and evolution of the contemporary music theatre.