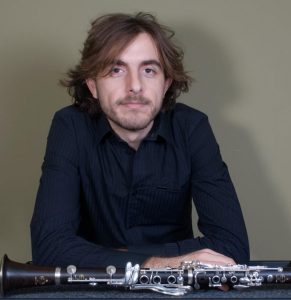 Spyros was born in Corfu in 1978. He took clarinet lessons at the Mantzaros Philharmonic Society and continued his studies at the PhilipposNakas Conservatory, to obtain his professional diploma. He then received the “Alexandra Triandi” scholarship from the Friends of the Music Society to study at the Conservatoire Royal de Musique in Mons, Belgium. Obtaining support from the State Scholarships Foundation of Greece, Spyros advanced his studies at the Fontys Hogescoolvoor de Kunsten, as well as at the Conservatorium van Amsterdam, where he studied “Contemporary Music through Non-Western Techniques”.

He has collaborated with the most significant orchestras and cultural organisations in Greece and has performed as a soloist along with the Royal Chamber Orchestra of Wallonia (Belgium). He has been a basic member of the artistic direction and organisation team of the International Summer Academy of Wind Instruments in collaboration with the Ionian University and the Mantzaros Philharmonic Society (2014-2015).

Being one of the most active clarinettists of his country, Spyros Tzekos collaborates with Ergon Ensemble, and performs regularly with the Ventus Ensemble and the ARTéfacts Ensemble, of which he is also a founding member. Since 2007 he has been the first principal clarinet with the Greek National Opera Orchestra.