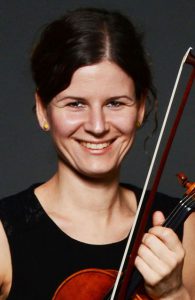 At the age of fifteen she started playing in a stringquartett which won several competitions. She subsequently performed with the „Faustquartett“.
Leila Weber was awarded scholarships to attend the “Fellhauer Stiftung” and “Idyllwild Arts Festival” in Los Angeles.

She has played with orchestras such as the “Berliner Philharmoniker”, „Konzerthausorchester“ Berlin, „Kammerakademie“ Potsdam „ Ensemble Resonanz“ Hamburg and „Gustav Mahler Jugendorchester“.

She was invited and presently plays withe the Miranda Quartett at the festival for contemporary music „ Infektion!“ at the State Opera Berlin.

Since 2008 she has worked closely with El Sistema in Venezuela, where she regularly appears as a guest artist. She is founding member of Hangarmusik, were refugee-and children of Berlin are playing orchestra together: www.hangarmusik.de