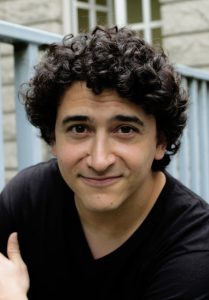 Eleftherios Veniadis (1977) grew up on the island of Chios. He studied acting at Veaki Superior School of Drama, piano violin and Music Theory in Athens. After obtaining a scholarship from the “Ioannis D. Pateras” Foundation of Chios, he studied composition (Diploma) at theBerlinUniversity of the Arts (UdK Berlin), from where he graduated with the highest degree and he continued his studies (Master’s) in Carl Maria von Weber (HfM Dresden). He has received many scholarships (Union of Greek composers, Franz- Grothe, Pateras Foundation, NaFöG of the city of Berlin) and his works have been performed in many festivals of contemporary music. With the dance-theatre-music company “[Zwischen]” he won the 1st “BERLINER OPERNPREIS:“ in June 2012as part of the international competition of the Neukoellner Opera, as well as the research scholarship NaföG of Berlin. The performance “‘Georgios Souris Now”, which started from Chios, was staged at the Athens Concert Hall within the context of Athens and Epidaurus Festival 2016. He has composed music for theatrical performances (“Idomeneas”, “Risos”, “Cyclops”, “Penthesilea” and more), while his plays have been performed in international contemporary music festivals, such as Klangwerkstatt Berlin, Randfestspiele Festival Neue Musik Zepernick, Unerhörte Musik Berlin, Biennale for New Talents in Kolhn, Biennale for contemporary musical theater and in significant concert halls such as Athens Concert Hall, the Onassis Cultural Center and Deutsche Oper Berlin. During the last semester, having been invited by the Department of Scenography and Costume Design of the Academy of Fine Arts in Dresden, he gave a seminar about the development of the musical and theatrical concepts based on his play entitled “Seven Sinful Songs”. ( www.veniadis.com )